Mr. JK has a second home near Bellows Falls, Vermont.   The house is the oldest home in the county.  It has a fully modern kitchen, a pool, all sorts of grilling and smoking devices,  and it is situated a stone’s throw from the Connecticut River.  Mr. JK tries to organize a ‘Boy’s Weekend’ in the spring and the fall, and invites friends, colleagues from work, random passerby on the street, etc.  The 2010 Spring Weekend was a few weeks back.  Unfortunately, everyone Mr. JK invited crapped out on him except for the V-Man and me, so it was just the three of us.

Being in Vermont is wonderful, but getting to Vermont is a royal pain in the ass.  For reasons that no one can adequately explain, the V-Man and I left Jersey City at about 2 p.m. on Friday afternoon, with Mr. JK taking the train to New Haven.  We were going to pick him up there when he got off the train shortly after 4 p.m. and continue on to Vermont.  That plan did not survive first contact with the enemy.  The V-Man and I hit the Merritt Parkway at which point we came to a dead stop.  We never got above twenty miles per hour, and even though Connecticut is a small state, it takes forever to cross it if you are constantly braking your car.  Things got so bad that I picked out a fat bald guy smoking a cigar in his Audi convertible, and told the V-Man that I wanted to grab the tire iron from the trunk and beat the crap out of “that smug asshole.”  The V-Man is as even keeled and as level-headed as anyone I have ever known, and even he thought it was a pretty good idea.  Good God, we hated that guy, smoking his stogie with his stubby pink fingers, while he jibber-jabbered on his cell phone, no doubt locking in another obscene bonus with our bailout money.*

After our hell ride, we finally pulled into New Haven and met Mr. JK at Modern Apizza.  As a proud Jersey Guy**, and as someone with great affection for New York City, it pains me to say this, but it is absolutely true:  The world’s best pizza is in New Haven.  Pepe’s and Sal’s are the famous New Haven Pizzerias, but Modern is every bit as good.  I am partial to the clam pie with red sauce, but you cannot go wrong with whatever you order.

We scarfed down some pizza and hit the road again.  The V-Man had picked up some beers for Friday night, but come Saturday morning, we needed to replenish the supply and headed to the Brattleboro Co-op to get some provisions.  Before we left, Mr. JK told me to dig through the freezer and see if there was “anything good for dinner.”  Um, yeah, these New York Strip Steaks will do nicely, and these scallops will make a nice appetizer***.  We tossed everything on the counter to thaw, and headed down to Brattleboro.

Brattleboro is a hippie haven.  On the walk from the car to the Co-op, I counted a half dozen used bookstores, a used record store, two bike shops, at least three yoga studios, and countless non-Starbucks coffee shops.  Lots of Volvos with “Kerry for President” stickers, tons of hybrids with “Obama” stickers, and given enough time, I am sure I could have found an old Saab held together by a dream catcher, some duct tape and a faded “Dukakis for President” bumper sticker.  On the drive in to town, we passed a yard sale that was selling homemade tie-dye t-shirts.  I wanted to stop, putting forward my best argument that “we are just the kind of assholes who could make tie-dye cool again” but by this point Mr. JK and the V-Man were ignoring me.

We stocked up on some beer and veggies at the Co-op.  On the walk back to the car I tried to “Visualize World Peace” as so many bumper stickers demanded.  I put forth my best effort, but every time I closed my eyes, all I managed to visualize was the heaving bosom of Scarlett Johannson, so we headed back to Mr. JK’s place on the river.

The first beer we tried was the Elysian Jasmine IPA.   When I lived in Virginia, there was a magnolia tree outside my bedroom window, and I loved the aroma of the magnolia

blossoms drifting in my window at night. Even on hot and muggy summer nights, I would leave the window open and go without air conditioning just so I could smell those magnolia blossoms.  For some reason, I equate magnolia blossoms with jasmine flowers.  I understand that makes no sense, but I was hoping for some flowery aroma from this beer, and it had none.  It was not bad as far as IPAs go, but it was not what I was hoping for, 6/10.

As the day crawled on, we kept popping open our beers.  McNeill’s Brewing Co. is a local Brattleboro brewery and we had a few of their beers.  First

up was the Firehouse Amber Ale. This was hoppier than most amber ales I have had, with some citrus aftertaste.  The pour was pale orange and cloudy.  Given the hoppy profile, I would classify as this closer to an IPA than an amber ale.  It was a good beer, but paled in comparison to some of the home runs we had later that night, 5.5/10.

The first “Holy Shit, This is Good BEER!” of the night was another offering from McNeill’s, the Warlord Imperial IPA.

This poured a deep copper, almost mahogany, with a minimal head.  There were some big whopping hoppy aromas, pine and tangerine, which carried over to the flavor.  Those hops were balanced by some bready malts, and there was enough zing from the alcohol (8.5% ABV) to keep everyone honest.  I loved this beer, moreso than either Mr. JK or the V-Man, but even they liked it.  I am giving it an 8/10, though they would probably grade it lower

We fired up the the chimney starter for the grill, and while we waited for the coals to turn grey, Mr. JK organized a shooting contest.  While Mr. JK and the V-Man knocked down beer cans without effort, I failed to ding a single one.  My argument that the sight was defective was countered by the V-Man shaking his head sadly and saying, “Dude, we’re using the same gun.”  The V-Man eventually stuck a single bottle cap on one of the cans, which Mr. JK nailed on the next shot.  He said the bottle cap will be back from the taxidermist next week, and it is going over the mantelpiece, no matter what Mrs. JK says. 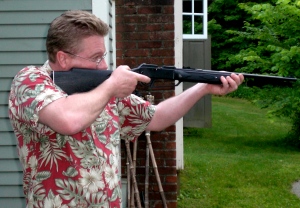 The Berkshire Coffee House Porter was a chocolatey espressoish explosion of flavor.  Deep and dark in color, this was a complex beer whose flavor profile changed as it warmed.  At first the chocolate flavors were bitter, but they slowly sweetened, and the mild hop bitterness became more pronounced.  Coffee was the dominant flavor, and it increased as the glass warmed.  This was a great beer, 8.5/10, and would have been the beer of the weekend,

until we cracked open the Sierra Nevada Thirtieth Anniversary Fritz and Ken’s Ale.

I have not been shy in extolling my love for Sierra Nevada. I think they are one of a handful of truly great brewers in the world, and even their missteps are decent, but Sweet Jeebus, this was fantastic even by those lofty standards.  This was guest brewed by Fritz Maytag, the founder of Anchor Brewing and the granddaddy of the American Craft Beer industry.  The Thirtieth poured a deep dark brown, almost black.  There was no light shining through it.  I picked up some cocoa and dark roasted coffee flavors, with a hint of vanilla as well, and there were some hops also, but just a trace.  The mouth feel on this was wonderful, like liquid velvet.  It is a strong beer at 9% ABV, but it is so damned good that you could drink it all night.  I have never given a beer a perfect score but this is as close as I have come.  It gets a 9.9/10, and the .1 reduction is because Sierra Nevada did not put one of those foil doo-hickeys over the cork.

*When even a staunch free market libertarian like me is sounding like Che Guevara’s  nephew from the suburbs, the revolution cannot be far off.

**Yep, New Haven Pizza is better than the Star Tavern, and I love that place.

***My secret to cooking scallops is that you do not flip them.  Whether you are cooking them on the grill or in a pan, you sear the bottom and then remove them from the heat.  If done properly, the cooked side will be caramelized, the top side will be slightly raw.  The combination of textures is fantastic.

7 Responses to Weekend in Vermont: Beer, Beef, and Light Firearms