Mr. JK’s teenage son, Lee Harvey TK, has taken to calling me the ‘Brewpub Wizard’.*  The nickname is based on a single fortuitous happenstance which occurred a few weeks ago up in Vermont.

Lee Harvey TK, seventeen years old and the proud carrier of a learner’s permit, was itching to drive, and Mr. JK and I were perfectly content to let him play Hoke to our collective Miss Daisy.  We needed beer, food and fireworks for the Fourth of July, and decided to go to the food co-op in Brattleboro for the beer and food.  In the days leading up to the Fourth, we had been drinking beers from McNeill’s Brewery in Brattleboro.  Their beer ranges from good to great, and at $3.99 for a bomber bottle, their brews are certainly cost effective.  I insisted that we also stop at McNeill’s for a beer while in Brattleboro.

I had never been to McNeill’s, but that did not stop me from telling Lee Harvey TK how great the cheeseburgers were at the brewpub as we drove to Brattleboro.  Our normal route to Brattleboro was blocked off due to a July 4th Parade, and the detour had us all twisted around.  I was in the backseat barking directions to Lee Harvey TK, even though I had no idea where I was going.  Mr. JK was shouting contradictory directions, with about as much idea of where he was going as I did.  He shouted “Left!”; I barked “Right!”  For some reason, Lee Harvey TK ignored Dad and turned right, and as we turned the corner, McNeill’s was in front of us. I cannot emphasize this enough:  This was sheer dumb luck.  I had absolutely no idea where the brewpub was located.  As we parked, Lee Harvey TK turned to me and said, “These cheeseburgers better be good.”

The bar at McNeill's

Mr. JK and I had a few beers at the bar while Lee Harvey TK sullenly drank his club soda, and whupped us at the various bar games they had.  We had the cask conditioned Warlord Imperial IPA, which was outstanding, and a few others.  Unfortunately, the taps were not working properly, so the selection that day was extremely limited.

On to the bombers we tried over the course of a few days:

The Champ Ale (named after the Lake Champlain monster, America’s very own Nessie) was light and refreshing, perfect for the blazing heat we had in Vermont.  It had a nice yeasty tang to it, very low hops bitterness, and a low 5.5% ABV.  The Champ Ale bills itself as an American Pale Ale, but it tasted somewhat Belgian to me.  Whether Belgian or American, it was still good, 7.5/10. 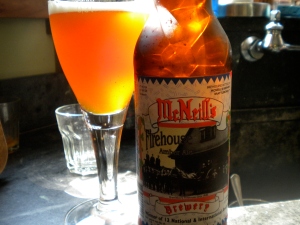 The Firehouse Amber is one of the better amber beers I have come across.  Amber Beers are like Brown Ales.  They are usually not bad, but they are almost never great.  The Firehouse is not great, but it comes closer than most amber beers I have tried.  It poured cloudy and amber, and had a nice fruity maltiness with a touch of hops bitterness.  This was one of the more pleasant beers of the weekend, 7.5/10.

Speaking of Brown Ales, McNeill’s Professor Brewhead’s Brown Ale, like the Firehouse Amber, is one of the better examples of the style that I have tasted.  It poured a light brown with a decent head and lacing.  It smelled yeasty and bready, with more hops in the taste than in the nose.

The hops had a mild orange and apricot flavor to them, and balanced the malts nicely.  While brown ales are not my favorite style of beer, this is a good one, 6.5/10.

The Blonde Bombshell was a highlight of the blistering hot

weekend in Vermont.  Hoppier than most golden ales, and certainly hoppier than I expected, this had a refreshing citrus flavor which was helpful on the one hundred degree days we were sweltering through, 7.5/10.

The Dead Horse IPA was a bit disappointing.  It was not awful, but considering how good the other beers were, and considering that IPAs are the bread and butter beers for most craft brewers, this should have been a home run.  Instead, it was a ground rule double.  The hops were not distinctive, and the beer just did not come together as well as the others we tried, 6/10.

*Lee Harvey TK’s nickname needs a little explaining.  As loyal readers know, Mr. JK has a BB gun at his house in Vermont, and we occasionally engage in shooting contests when we are up there.  I continued my Mr. Magoo like tendency to hit everything but what I was aiming at, while Mr. JK was humming along at a .500 clip.  Lee Harvey TK simply did not miss anything.  At first I thought he was lucky, but when he knocked down twelve cans in a row, and hit the bottle cap on his first shot, I realized it was not luck.  A few years from now, when he takes out both Osama Bin Laden and Kim Jong Il with a single shot from two miles away, remember who was the first to tell you about him.

However, it was not all driving and shooting cans for Lee Harvey TK.  We were watching the Spain-Germany World Cup game, and as the clock ticked down and Spain advanced to the final game, he said, “Break out the PASTA! Spain is going to the Finals!” Mr. JK and I both looked at him with that “You Did Not Say Something That Titanically Stupid In Front Of US, Did You?” look on our faces, and Lee Harvey TK immediately tried to backtrack, but it was too late.  For the rest of the week, we kept offering to make him “Pasta de Espana” or “Fettucine de Madrid” for dinner.  He replied “shut up, they have pasta in Spain” but he knew he had put his foot in his mouth, and that we were not going to let him forget it.

Magic Hat #9 (and some thoughts on Hoboken)

Magic Hat is located near Burlington, Vermont. It is a beautiful place, and if you have never been there, get up there as soon as you can.  Burlington is a college town, so the place is crawling with coeds, and it also has those ‘creative’ types that linger around every college town in America.  Befitting this locale, Magic Hat beers have some of the coolest packaging and funkiest names in the craft brew world.  Unfortunately, their beers often do not live up to expectations set by the packaging and the naming, at least to my palate.

Credit must be given to the Magic Hat sales team that covers Hoboken, because at least one Magic Hat beer was on tap in every Hoboken bar I stopped in on Friday night.  Magic Hat #9 was the beer of choice for the V-Man and me as we hit the taverns of Hoboken, at least in part because of the unique profile of the tap handle.  It was easy to spot, and the combination of my failing eyesight and the dim lights favored by drinking establishments the world over make it too hard for me to read the names on tap handles unless I am right on top of them.  I could just mouth the words “MAGIC. HAT.” and hold up two fingers to get us beers.  Unfortunately, the Magic Hat #9 is another of the Magic Hat beers that falls short of expectations.  It is a slightly hoppy pale ale that tastes like it may have been flavored with apricots.  It pours a nice amber color with a decent head.  The #9 has all the component parts to be a really good beer, but does not quite get there.  I wanted this to be so much better than it was, but it was just average, 5/10.

I have not been out and about in Hoboken in ages, except for the occasional trip to Maxwells to see Marah or some other band.  It has easily been twenty years since I went for a pub crawl in Hoboken.  I did not really like the town back then.  It always struck me as the post-college town, where the keggers were replaced by cheap bars, and Buffy and Chip continued their klutzy waltz of romance and/or tawdriness that began in sophomore year while walking back to the dorm from the abnormal psych class and would continue until they threw caution to the wind, got married, had kids, had affairs, and finally got divorced, but back then I could suck it up for a night.  Now that I am in my mid-forties, with the tread on my tires just a little too worn from the roads I have traveled, I cannot fucking stand Hoboken.   I also have far less tolerance for nonsense now than I did then, and Hoboken is full of nonsense.  Add in that every bar we went to played Lady GaGa at head splitting volume and every patron looked like they were about sixteen years old***, and it was an early night for your humble author.

Despite it being the warmest weekend of this young year, when my thoughts usually turn to hefeweizens and saisons, I grabbed a few different stouts this weekend.  I chose one stout billed as having a coffee flavor, and one with a chocolate taste.

First up was the Coffee Stout, part of the Brewer’s Reserve Series from Vermont’s Long Trail Brewing Company.  There was absolutely no head at all on this deep, dark pour.  Although this is brewed using Vermont Coffee Company Dark Roast coffee beans, specially roasted for Long Trail, the first thing I noticed in the aroma and the taste was chocolate.  There was a slight coffee aftertaste on this, which as it warmed tasted somewhat like cola.  This was a smooth drinking beer even with an 8% ABV.  I give it a 6.5/10.

The Dragonstooth Stout from Elysian Brewing is brewed with rolled oats, roasted barley and chocolate malts, with centennial and cascade hops to give it some bite.  The first thing I noticed on this beer was the taste of dark coffee, with a hint of cocoa in the background, along with some smoke.  The hops are prominent in the aftertaste.  This poured with a frothy cappuccino colored head, which lasted to the bottom of the glass.  Not as smooth as the Coffee Stout, but I liked the hoppy bitterness.  7/10.

To sum up, the Coffee Stout tasted chocolatey to me, and the chocolate stout tasted like coffee.  There is a good chance that I have no idea what I am talking about.