Meh on this one, a rare misstep from the usually excellent Oskar Blues. Oskar Blues Deviant Dale’s IPA pours a deep amber with a resinous and vegetal aroma. There are lots of hops, lots of sweet malts, and lots of alcohol, but there is no balance whatsoever. It just whomps you in the mouth, and there is something weird in the flavor that I have never experienced in a beer before, like a fermented vidalia onion, plus a soapy astringency which I have had before, sad to say. I finished it, but only just, 5/10.

Daniel Patrick Moynihan would not have liked this beer

Here is what I know about Utah: Lots of mountains; Lots of Mormons; and there is a gigantic salt lake out there. I stuck my left foot in Utah when I visited the Four Corners many years ago, and I love SLC PUNK although I have no idea how accurate a portrait it paints of the Salt Lake City Hardcore Punk scene. I read Jon Krakauer’s Under The Banner of Heaven, and while the book is set in Utah in part, poor white folks in the mountains are similar, whether those mountains are in Utah or West Virginia or Passaic County (home of the Jackson Whites). And my friend BB lived in Utah, although he got out at the earliest opportunity.

That’s it. That’s all I got. Or rather, that’s all I had until I stumbled upon the Squatters Hop Rising Double IPA, brewed by the Utah Brewers Cooperative. 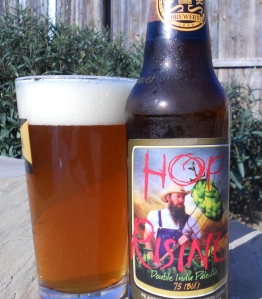 This excellent beer is somewhat malt forward at first for a Double IPA, with the tangy pine hops asserting themselves towards the end. As you can see, it pours a beautiful cloudy burnt orange color with a fluffy white head, which is retained for the entire glass.  The 9% ABV is well hidden by this beer’s smooth taste. Highly recommended, 7.5/10.

It is remarkable the extent to which craft beers have become mainstreamed. Even just a few years ago, I would have looked at a barrel aged beer as akin to Sasquatch or the Loch Ness Monster: I had heard of them, and would have been open to their actual existence, but I would have demanded strict proof before being convinced. Now, they are so normal, that if a bar does not have at least one barrel aged beer on the menu, I scoff at their puny selection, and when my brother in law showed me this bottle, I shrugged and said “looks good, let’s give it a try”.

I should not be so blasé about these beers. The Great Divide Eighteenth Anniversary Oak Aged Double India Pale Ale might be a mouthful to say, but it also has a mouthful of flavor. Lots of caramel malts, with woody vanilla flavors from the oak, and tons of floral and orange peel hops, all of which are needed to stand up to the 10% ABV. This is a remarkably smooth beer considering how much is going on the flavor profile. It is a sipping beer, and a fine one at that, 7.5/10. 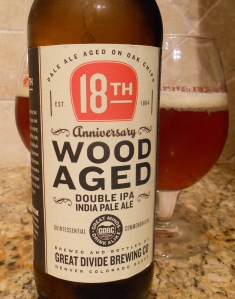 1. Pace yourself so that you can enjoy all the beers that you will be sampling.

Time for a couple of IPAs from the usually excellent Laughing Dog Brewery out of Idaho: First up is the Rocket Dog Rye IPA. This looked beautiful in the glass, with a robust color and head like a lemon meringue pie from the the Tick Tock Diner. The aroma was great too, with lots of hops and rye wafting

through the room. Sadly, my excitement was tempered by my first sip. It had a strange oily consistency and an off-putting metallic aftertaste. I finished the bottle, hoping against hope it would improve as it breathed, but it was not to be. I suspect this may have been a bad bottle, so I may give this another shot in the future, 4/10.

The Devil Dog Imperial IPA, on the other hand, is what I have come to expect from Laughing Dog. It pours a cloudy golden orange, with a big head that settled down some, but with enough tight lacing on the side of the glass to keep it going. The hops were zesty orange and lemony, with some faint coriander in the background. The malty sweetness balanced the whopping 10% ABV. I enjoyed this immensely, 8/10.

I had never even heard South Carolina’s Thomas Creek Brewery before I saw some of their beers while visiting Dad in Florida, so being the Beer Dork that I am, I was eager to sample some. India Pale Ales are my favorite style of beer, and a good Imperial IPA usually gets me to ring the brass bell, so I ordered the Up The Creek Imperial IPA while out with Dad recently.The label and the brewer’s website claim this beer has 12.5% ABV. That high ABV is well hidden by the complex flavors and balance of this beer, although it is plainly evident when you stand up from your barstool to take a leak, and if it is not evident then, the next morning’s railroad spike throughout the middle of your forehead let’s you know you were drinking a whopper. It pours a dark brown, with a dark head as well. This is not as hop forward as you would expect from an Imperial IPA. There is brown sugar, coffee and caramel in the malt profile. This is a good beer, but don’t have more than one, especially if you re driving, 7/10.

Cryptozoology: The Yeti and The Swamp Ape

As a rugged outdoorsman*, extreme adventurer**, and acolyte of Teddy Roosevelt***, I have spent months at a time in the wild unmapped corners of the globe, and have had close encounters with a variety of cryptozoological phenomenon.  There was the time I was fly fishing on Lake Champlain and hooked Champ but was unable to land the beast.  Growing up in New Jersey, the Jersey Devil was a regular visitor to our backyard, stopping to swim in our pool, before taking off for the flight to the Pine Barrens. I have had several recent encounters with the Chupacabra while out walking my dogs, and the less said about my experience with the Mothman, the better.

It is in the field of Sasquatch studies that I have been most successful. On a recent trip to the Himalayas, I encountered the Yeti.  More importantly, I encountered two distinct kinds of Yeti. END_OF_DOCUMENT_TOKEN_TO_BE_REPLACED

The label describes Ithaca Beer Company’s Excelsior Thirteen Anniversary Ale as a “Malt Beverage Brewed With Citrus Peel – Double Hoppy Wheat Ale” but that somewhat schizophrenic description does not come close to describing the awesomeness that is this beer.  It is boozy (8.9 % ABV) like a barleywine, chewy like an oatmeal stout, hoppy like an imperial IPA, and as refreshing on a hot summer day as any hefeweizen.  Did I mention that it has a nice orange and lemon peel flavor? No? Well, add those to the flavor profile.  I don’t know what to call this, other than great, and a contender for Best Beer of the Year, 9/10.  Big thanks to Aaron for getting this to me in a recent trade.

Houston’s Saint Arnold Brewing Company has a series of special releases called the Divine Reserve.  Each release is a different beer style, and is extremely limited in quantity.  I had the Divine Reserve Number Ten at the end of last year, and enjoyed it immensely, so when I heard that Number Eleven was going to be an Imperial IPA, one of my favorite beer styles, I was looking forward to giving it a shot.

I would have tried it anyway, but when someone on my twitterfeed wrote #DR11 > Pliny the Elder, I made damn sure to secure some.  I sent the word out that I was looking for it and when the GEB said her local shop had a couple of cases, I gave her the greenlight to grab me a six.

It pours a beautiful burnt orange color that practically glows, with a nice meringue like head. The hops whack you in the nose before you take a sip.  The hops are fruity, with some grapefruit, orange peel, pine and mango, perfectly balanced by the caramel malts. This a very smooth and easy drinking beer, which is dangerous as it clocks in at 10% ABV.  I won’t say it is greater than Pliny The Elder, but that comparison is not all that outlandish, 9/10.

I have had this on tap a few times over the past several weeks.  While still an excellent beer, all of those wonderfully complex flavors are a bit muted on draft, dropping the score to 8/10.

I am a huge Sierra Nevada fan, and was beyond excited to see this on the shelf at my local beer emporium, but the Sierra Nevada Hoptimum falls short in a number of ways.  First of all, the name:  Sierra Nevada usually does not use puns when naming their beers, preferring to use simple descriptions like ‘Pale Ale’ or ‘Stout’.  This is the first pun I can recall them using, and let’s be honest, it is sort of lame, not punny at all.  It is certainly no ‘Modus Hoperandi‘. 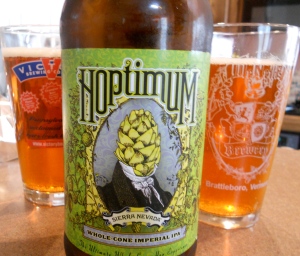 Second, the label:  Anthropomorphizing a hop cone has been done so many times before that it is no longer creative or interesting.  Normally, I would not even comment on the label, but this just struck me as dull.  Unfortunately, the label is not the only thing that is dull about this beer.

Third, the beer:  The beer is not bad, but it is not up to Sierra Nevada’s usual high quality.  It pours a nice orange color.  The hops are piney and prevalent, along with some caramel malt, and it is boozy at 10.4 % ABV, but there is just not much going on here.  It is just not very interesting, and considering this is Sierra Nevada we are talking about, interesting should be the bare minimum we can expect, 5.5/10.