I can never be certain about these things, because so much has been lost in the haze of alcohol, old age, bad TV and sleepless nights, but I believe that Moa Brewing Co.’s Imperial Stout is the first beer from New Zealand that I have drunk (Drank? Imbibed? Howzabout ‘knocked back’?). It is certainly the first beer from New Zealand that has been reviewed here at Tilting Suds. Of that, there is no question.

I never liked Split Enz, but I like this beer. Might be a time for a critical reassessment of Split Enz

And for a first beer from New Zealand, I picked a good one. The Moa Imperial Stout is aged in Pinot Noir barrels, and the oak from the barrels is the first thing I picked up in the aroma. The beer poured an inky black with ruby highlights, with a quickly dissipating head. Normally Imperial Stouts are heavy in taste and texture, but his beer had a delicate mouthfeel, and the flavors (oak, coffee, cocoa, vanilla) were also muted, as was the 10% ABV. I did not pick up any Pinot Noir notes, but then again, I am such a wine barbarian that I cannot tell a Pinot Noir from a fucking Merlot. Let’s just say that if there were any red wine notes here at all, I missed them. Let’s also say that my first Kiwi beer adventure was an enjoyable one, 7.5/10.

Catch Up Post: Beers That I Have Been Drinking

Sorry about the absence. Events conspired against me to keep me from posting as regularly as I would have liked, but crap happens from time to time. To make up for some lost time, here are some quickie reviews:

END_OF_DOCUMENT_TOKEN_TO_BE_REPLACED

Jester King Wytchmaker Redux and WILD! (And A Bonus Review of the Farmhouse Black Metal Stout!) 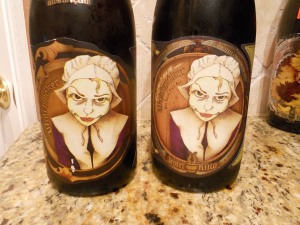 The only difference between the two is the Farmhouse Rye IPA uses farmhouse yeast in place of the regular ale yeast. This gives it a slightly sour and funky flavor. It pours a little cloudier, and the aroma is just a touch funkier, with a touch of sourness added to the flavor. The difference is subtle, but nice. I don’t think it makes it a better beer, and it is not substantially different either, but it is still damn good, 9.5/10. 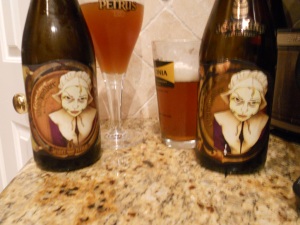 The Farmhouse version is a little cloudier, a little funkier, but just as tasty.

I’d make some ‘Black Ops’ crack about securing this bottle in a Mission Impossible style raid, complete with scuba diving, spelunking, skydiving, and jaywalking, but the truth is that GEB called me a few weeks before Christmas to say she was in a beer store and they had some Brooklyn Black Ops and should she get some for her Dad for Christmas and I shouted “YES! OH! GOD! FOR THE LOVE ALL THAT IS HOLY! GOD! YES!” She somehow got the impression that I was a tad excited that Black Ops had made it down to Texas so she grabbed me a bottle as well.

According to the label, this is a Russian Imperial Stout which was aged in bourbon barrels for several months. It was bottled flat and refermented in the bottle using champagne yeast. The vanilla and oak aroma from the bourbon barrel is immediately apparent. The aroma is almost overwhelming, but the flavors are surprisingly muted, with some chocolate and coffee as well. It has a light and crisp mouthfeel which I attribute to the champagne yeast refermentation. This has over 11% ABV but there is no alcohol burn at all. The Black Ops is what a Black Velvet should taste like. The only downside to this beer is that GEB did not get me more than one bottle, but  I am glad she got me the one, 9/10.

Mr. JK is quite the generous soul. Mr. JK was being his usual generous and jolly self during Christmas 2010 when he gave Tilting Suds an oak whiskey barrel and some ‘raw’ spirits to age in the barrel. I barreled the whiskey just before Christmas, 2010. The liquor was clear when I poured it in the barrel; It was also as smooth as jet fuel. On New Year’s Eve, 2010, I poured off a bit to sample it. It had taken on some color but was still harsh firewater, nearly undrinkable. I sampled it again on Saint Patrick’s Day and Independence Day. Each successive sample took on more color and flavor, but the firewater aspect hardly mellowed at all. I decided that I would leave the whiskey in the barrel until after Thanksgiving to give it time to cool off, so to speak. This was a tactical error on my part. While my plan to mellow the whiskey was a sound one, what I did not count on was the Angels being so parched that their share would drain nearly the entire barrel.  After just under a year in the barrel, between evaporation and the oak absorbing the liquid, what started as 1500 ml of whiskey* was reduced to this: END_OF_DOCUMENT_TOKEN_TO_BE_REPLACED

Cryptozoology: The Yeti and The Swamp Ape

As a rugged outdoorsman*, extreme adventurer**, and acolyte of Teddy Roosevelt***, I have spent months at a time in the wild unmapped corners of the globe, and have had close encounters with a variety of cryptozoological phenomenon.  There was the time I was fly fishing on Lake Champlain and hooked Champ but was unable to land the beast.  Growing up in New Jersey, the Jersey Devil was a regular visitor to our backyard, stopping to swim in our pool, before taking off for the flight to the Pine Barrens. I have had several recent encounters with the Chupacabra while out walking my dogs, and the less said about my experience with the Mothman, the better.

It is in the field of Sasquatch studies that I have been most successful. On a recent trip to the Himalayas, I encountered the Yeti.  More importantly, I encountered two distinct kinds of Yeti. END_OF_DOCUMENT_TOKEN_TO_BE_REPLACED

How much longer will it be till we cross
that Mason Dixon Line?
At daylight would ya tell that engineer
to slow it down?
Or better still, just stop the train,
Cause I wanna look around.

END_OF_DOCUMENT_TOKEN_TO_BE_REPLACED

I never listen to heavy metal, unless I am in the car with my brother-in-law, Jeff.  Jeff is a serious metalhead, although you’d never know it by looking at him.  He keeps his hair closely cropped, usually sports polo shirts and khakis, and generally appears to be a typical suburban dad.  Take a quick scroll through his Ipod, however, and all you see is Lynch Mob, Alice in Chains, Metallica, Dokken, Van Halen, Megadeath, et al.  I have only recently got him listening to Bruce Springsteen, although I suspect he finds Bruce to be on the mellow side.  He steadfastly refuses to listen to Dylan.  I have even tried the native son gambit on him, as Jeff is from Minnesota like Dylan, but no luck so far. END_OF_DOCUMENT_TOKEN_TO_BE_REPLACED

Mr. JK has a second home near Bellows Falls, Vermont.   The house is the oldest home in the county.  It has a fully modern kitchen, a pool, all sorts of grilling and smoking devices,  and it is situated a stone’s throw from the Connecticut River.  Mr. JK tries to organize a ‘Boy’s Weekend’ in the spring and the fall, and invites friends, colleagues from work, random passerby on the street, etc.  The 2010 Spring Weekend was a few weeks back.  Unfortunately, everyone Mr. JK invited crapped out on him except for the V-Man and me, so it was just the three of us.

Being in Vermont is wonderful, but getting to Vermont is a royal pain in the ass.  For reasons that no one can adequately explain, the V-Man and I left Jersey City at about 2 p.m. on Friday afternoon, with Mr. JK taking the train to New Haven.  We were going to pick him up there when he got off the train shortly after 4 p.m. and continue on to Vermont.  That plan did not survive first contact with the enemy.  The V-Man and I hit the Merritt Parkway at which point we came to a dead stop.  We never got above twenty miles per hour, and even though Connecticut is a small state, it takes forever to cross it if you are constantly braking your car.  Things got so bad that I picked out a fat bald guy smoking a cigar in his Audi convertible, and told the V-Man that I wanted to grab the tire iron from the trunk and beat the crap out of “that smug asshole.”  The V-Man is as even keeled and as level-headed as anyone I have ever known, and even he thought it was a pretty good idea.  Good God, we hated that guy, smoking his stogie with his stubby pink fingers, while he jibber-jabbered on his cell phone, no doubt locking in another obscene bonus with our bailout money.* END_OF_DOCUMENT_TOKEN_TO_BE_REPLACED

I received these two bottles from Schlafly Brewing as part of my haul from the NCAA Tourney Boxes of Beer pool.  (Be sure to sign up for the World Cup Edition here).  First up was the Schlafly Grand Cru. 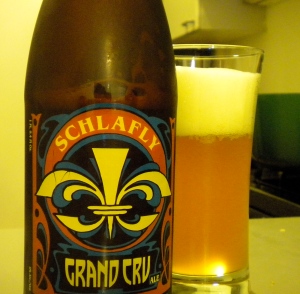 This poured a beautiful cloudy golden color with a fluffy white head that is retained to the bottom of the glass.  It is very aromatic with yeast, apple and pear, and some spicy alcohol as well.  At 9% ABV, this is a sipping beer, and a very enjoyable one at that.  There are some faint hops in the flavor, but the predominant notes are yeast, herbal spiciness and orchard fruits. This is an excellent beer, 8.5/10.

As good as the Grand Cru was, the highlight of the package was the Bourbon Barrel Aged Imperial Stout.  Opaque with ruby highlights, and a rich cappuccino colored head, this has a strong vanilla aroma, along with roasted malts.  Chocolate and toffee are the predominant flavors, but there is a strong vanilla aftertaste, presumably from being aged in the bourbon barrels. The bourbon and oak flavors really come through and balance the 10.5% ABV.  I would love to get my hands on some more of this outstanding beer.  I would drink some now, and lay some down to age, as this a complex beer that might improve with some cellaring.  Even without cellaring, the Schlafly Bourbon Barrel Aged Imperial Stout gets a 9.5/10 from Tilting Suds, as high a grade as I have ever given out.