Despite it being the warmest weekend of this young year, when my thoughts usually turn to hefeweizens and saisons, I grabbed a few different stouts this weekend.  I chose one stout billed as having a coffee flavor, and one with a chocolate taste.

First up was the Coffee Stout, part of the Brewer’s Reserve Series from Vermont’s Long Trail Brewing Company.  There was absolutely no head at all on this deep, dark pour.  Although this is brewed using Vermont Coffee Company Dark Roast coffee beans, specially roasted for Long Trail, the first thing I noticed in the aroma and the taste was chocolate.  There was a slight coffee aftertaste on this, which as it warmed tasted somewhat like cola.  This was a smooth drinking beer even with an 8% ABV.  I give it a 6.5/10.

The Dragonstooth Stout from Elysian Brewing is brewed with rolled oats, roasted barley and chocolate malts, with centennial and cascade hops to give it some bite.  The first thing I noticed on this beer was the taste of dark coffee, with a hint of cocoa in the background, along with some smoke.  The hops are prominent in the aftertaste.  This poured with a frothy cappuccino colored head, which lasted to the bottom of the glass.  Not as smooth as the Coffee Stout, but I liked the hoppy bitterness.  7/10.

To sum up, the Coffee Stout tasted chocolatey to me, and the chocolate stout tasted like coffee.  There is a good chance that I have no idea what I am talking about.

Dry is an apt description of this stout.  There is almost no malt sweetness to this.  It is packed with a nice toasted barley flavor and has  a noticeable hoppiness to it, which is not often found in stouts. It had a slight head which dissipated quickly.  This beer improved noticeably as it warmed, so I would suggest taking it out of the fridge an hour or so before drinking it.   This is the second Moylan’s beer I have had, and while not as good as the Hopsickle, it is a winner. 7.5/10.﻿

I am old, certainly old enough to remember the bad days in the long, long ago time before thousands of craft brewers bloomed across the land.  I remember when Heineken and Becks were thought to be good beers because they were imported and those Dutch and Germans knew how to make beer.  Hell, I remember when Tuborg was a good beer.  Tuborg, for God’s sake!

The only lights in those dark days were Bass Ale and Guinness Stout.  Both were widely available, albeit always tucked in the back of the fridge at the liquor store.  There was an advantage to buying either Guinness or Bass Ale when  you were underage.  You were never asked for ID.  It was just assumed that if you were drinking Bass or Guinness, you were old enough to drink.

I had not had a Bass Ale or a Guinness Stout in years.  There have been so many new and interesting beers, I had kind of forgotten about those two, but I was in a small store near a train station and wanted to grab some beer for the night, and it was either Bass and Guinness or a couple of bomber bottles of Corona.

The Bass Ale poured a clear amber with a mild hops and malt aroma.  It had a nice

head and was a pleasant drink. I have grown accustomed to IPAs and Imperial IPAs punching me in the mouth with hoppy bitterness, but that was certainly not the case with Bass Ale.  It was less hoppy than Sierra Nevada Pale Ale, but had a similar taste.  I think the only problem was that the bottle had probably sat unsold for ages, so it may have been mildly skunked, but it was not awful at all.  I give it a solid 6/10.  Fun Historical Fact About Bass: The Red Triangle was the first registered trademark.

Being of proud Irish descent, Guinness was my drink of choice in my late teenage years.  It had the reputation of being a strong beer, being black and flavorful, and I cannot tell you how many people told me that Guinness was made by “scraping the bottom of the barrel” of regular beer.  Total nonsense, of course, as was the belief that Guinness had more alcohol than most beers.

The Stout poured as dark as I remember it being, and I immediately noticed the aroma of toasted barley.  It had a milder flavor than I remember it having, though as noted with the Bass, I have become accustomed to craft beers, and it has been years since I have had a stout that was not advertised as a chocolate stout or a coffee stout or a chocolate-coffee-mocha stout.  I thoroughly enjoyed my first Guinness in years, and it has earned a spot back in my regular rotation.   7.5/10.

Oysters and stout, like coffee and doughnuts, spring and baseball,  and Martin and Lewis, is a classic combination, and I am certainly not one to question the wisdom of our ancestors.  It was a brave man who first shucked an oyster and thought to himself I must eat that; It was a genius who thought A good stout would wash this down nicely.  Many years ago, many more than I wish to admit to, I spent an afternoon in a bar in Galway, eating oysters and drinking Guinness, and chatting with a pretty French girl.  Of course my advances were spurned, which is more a testament to my lack of ‘game’ than the aphrodisiacal qualities of oysters and alcohol.

In recent years, some brewers have decided that if oysters and stout is a classic combination, stout brewed with oysters would be divine.  New Jersey’s Flying Fish is one of those brewers.  Flying Fish’s Exit Beers is a series of beers named after Exits on the New Jersey Turnpike.  Exit One is in South Jersey by the Delaware Bay, an area that was historically rich in oysters.

The stout poured a deep, dark brownish black, with a full head.  The complex flavor was more chocolate than coffee. This beer lacked the malty sweetness that many stouts have.  I did not notice any real oyster flavor, though the lack of malt may have been due to the brininess of the oysters.  No, I did not have fresh oysters with this, but I did have some raw little neck clams, and the stout and the clams complemented each other nicely.  8.5/10.

Here is an interesting Washington Post article about Oyster Stouts.  I have tried the Flying Fish Exit 1 Oyster Stout which is discussed in the article, and will post a review sometime soon.

The Orkney Isles are off the north coast of Scotland.   Whipped by winds and the North Atlantic Sea, they are starkly beautiful.  Isolation from the mainland instills streaks of pride and self sufficiency amongst those who live there, and while they may be Scottish, they are a breed apart.  Not everyone can live there, and those that do are a hardy bunch.

The Dragonhead Stout from the Orkney Brewery is what you would expect from such a place.  According to the label, this beer is a tribute to Viking heritage of the Orkney Isles.  Not being up on my Viking 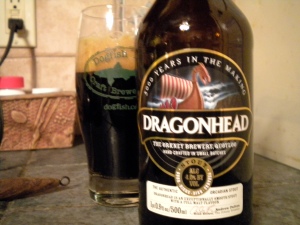 history, I do not know what type of beer Vikings drank, if they drank any at all, but this beer certainly fits nicely in to the popular image of Vikings. It pours a deep black with a creamy head.  You are hit immediately with a rich coffee aroma, and there is a dark chocolate aftertaste, and a creamy mouthfeel.  While the Dragonhead Stout clocks in at 4% ABV, this is not a beer you are gong to knock back, due to the intense rich flavors.  This is a keeper.  I give it a 8/10.